With nearly nine in 10 Kentucky adults wanting schools to be tobacco-free, will this be the year for a statewide law?

Most Kentucky adults, by far, want schools to be tobacco-free -- and bills to do just that have been introduced in the Senate and the House.

The latest Kentucky Health Issues Poll, taken Oct. 24 to Dec. 2, found that 87 percent of Kentucky adults favor tobacco-free campuses. Support was strong across party lines, with 89 percent of Democrats, 87 percent of Republicans and 82 percent of independents. The poll also found strong support among those with and without children in their homes: 90 percent and 85 percent, respectively. 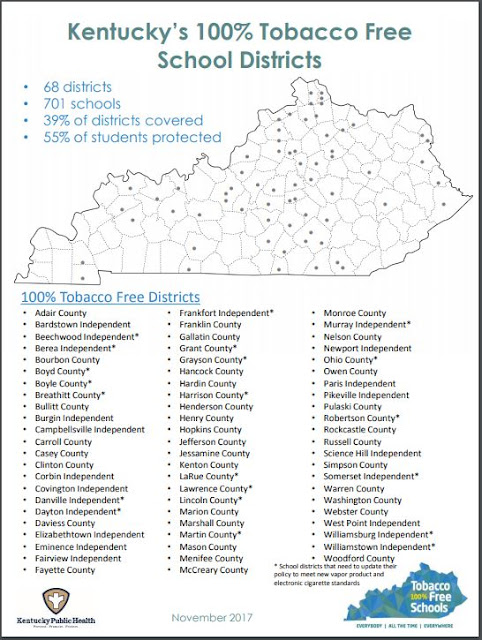 Smoke-free school policies are decided by local school boards, but that would change with enactment of Senate Bill 51 or House Bill 318, which would prohibit tobacco products on school properties and at school events. Both bills are still in each chamber's education committee.

The Kentucky School Boards Association told Kentucky Health News in November that it would support any legislation that proposes a statewide tobacco-free school law in the 2018 legislative session, because 81 percent of their members support it.

Alvarado said Senate leaders have told him that the bill needs to pass out of the House first this year, and if it does, he said he thinks it will pass in the Senate.

"My question is, who are the 13 percent who don't support this?" he asked."That's what it comes down to."

Rep. Kim Moser, R-Taylor Mill, who is sponsoring the House version of the bill, said in an e-mail that she has asked Education Committee Chair Rep. John "Bam" Carney, R-Campbellsville, if she can get HB 318 heard, but hasn't heard back from him.

According to the 2017 Youth Risk Behavior Survey, 26 percent of Kentucky high school students regularly (defined as at least one day during the past 30 days) use either cigarettes, electronic cigarettes, cigars or smokeless tobacco, with about 14 percent each using using cigarettes and e-cigs. The numbers are much higher, 40.5 and 44.5 percent, respectively, when students are asked if they have "ever" used e-cigs or cigarettes. The survey found that 45.8 percent of Kentucky high-school students who used any kind of tobacco product, including e-cigarettes, said they had tried to quit. Research shows that strong tobacco-free school policies can discourage youth from smoking and can also help those who want to quit.

Recent studies also show that e-cigarette use among youth can lead to smoking cigarettes.

"We were making great headway in reducing youth smoking until e-cigarettes made tobacco use somewhat socially acceptable again," said Ben Chandler, president and CEO of the Foundation for a Healthy Kentucky, which co-sponsored the poll. "It is imperative that we send the message to Kentucky's youth that using tobacco of any kind is dangerous. We can reinforce that message by ensuring that students don't see their peers, teachers and role models smoking and using tobacco on school grounds."

The poll, co-sponsored by Cincinnati's Interact for Health, interviewed 1,692 Kentucky adults by landlines and cell phones. The margin of error for each result is plus or minus 2.4 percentage points.
Posted by Melissa Patrick at 10:09 PM