Suicide Prevention Week Sept. 9-15; officials and journalists are paying more attention to this growing cause of death in Kentucky

In Kentucky, one person dies by suicide about every 11 hours, making it the 11th leading cause of death overall, according to data from the federal Centers for Disease Control and Prevention. 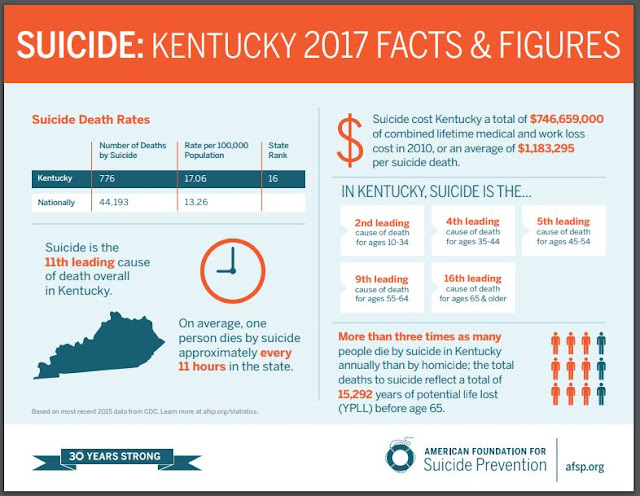 Efforts to increase suicide prevention and awareness often include "Out of the Darkness" community walks -- and those are still happening -- but the Louisville Health Advisory Board is adding something new this year called "Bold Moves Against Suicide Louisville," which will offer suicide prevention training in more than 85 locations between Sept. 9 and 15, which is National Suicide Prevention Week.

Dr. Val Slayton, a member of the advisory board's behavioral health committee, told Lisa Gillespie of  Louisville's WFPL that the training is part of the committee’s effort to bring suicides in the city down to zero. Gillespie reports that there were 584 deaths by suicide in Jefferson County from 2011 through 2015; during that period, there were 333 homicides in Louisville's county.

“The concept is that any suicide that exists may be related to an opportunity to stop that suicide,” said Slayton, who is also regional vice president for health services at Humana Inc. “And an important part of being able to stop suicide is by having individuals understand what to look for. And then how to intervene.”

People who take this training are often referred to as "gatekeepers," which the 2001 Surgeon General's National Strategy for Suicide Prevention report describes as "someone in a position to recognize a crisis and the warning signs that someone may be contemplating suicide."

The Louisville-based QPR classes will be taught in various locations, with four of them at the Foundation for a Healthy Kentucky at 1640 Lyndon Farm Court, Suite 100, on Sept. 11. Click here to see where else they are offered and to sign up.

The American Foundation for Suicide Prevention website lists six upcoming Out of the Darkness walks in Kentucky, including ones in Paducah, Greenville, Hopkinsville, Bowling Green, Madisonville and Louisville.

Other communities are stepping up their efforts around suicide prevention and awareness.

The West Kentucky Star reports that Mercy Health is hosting its second QPR training session on Sept. 5 from 2 to 3:30 p.m. at the Marshall County Health Department in Benton. The Star also promoted Paducah's Out of the Darkness Walk, to be held Sept. 8.

In April, the Star reported that local officials concerned about the number of people attempting suicide by jumping off bridges put up bright red signs at the foot of several area bridges that say: "You Are Not Alone" and give the number and website for the National Suicide Prevention Lifeline. "It is hoped that other regions in Kentucky will follow suit," the Star said, alluding to Kentucky's many rivers.

Samantha Powell, a certified prevention specialist at Four Rivers Behavioral Health’s Regional Prevention Center, told the Star, “It’s amazing how just a little thing like a sign can mean all the difference to someone contemplating suicide. To know there is a call they can make and someone will listen is a very effective prevention tool. I have read research about the success of signs like this from the QPR Institute and the Suicide Prevention Lifeline, and we decided that we could take a similar approach.” 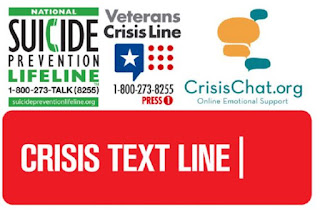 Help is available for anyone who is thinking about suicide or knows someone who is considering it. The National Suicide Prevention Lifeline offers free, confidential support and answers calls throughout the day and night at 1-800-273-8255. The Crisis Text Line is also available 24/7 by texting HOME to 741741.

Other Kentucky newspapers are paying more attention to suicide. The News Journal in Corbin reported on the importance of talking about suicide to reduce stigma, and knowing the risk factors and warning signs.

The Georgetown News-Graphic recently reported about a six-day, 100-mile firefighter walk that came through Scott County Aug. 22 and ended in Lexington Aug. 24 to bring awareness to firefighter cancer, post-traumatic stress disorder, and suicide. Jennifer Peryam writes, "There were at least 103 firefighter suicides and 140 police officer suicides in 2017, according to the Ruderman Family Foundation."

Studies show stories about suicide may influence others to attempt it, so it's important to follow some simple guidelines when writing about it.

In its "Preventing Suicide: A Resource for Media Professionals" guide, the World Health Organization notes that suicide imitation behavior resulting from media coverage is often related to how long the suicide is covered, the intensity and repetition of the coverage, and the amount of detail given about the suicide and the individual involved.

The guide offers great detail on the best ways for reporters to write about suicide, but offers these suggestions as a quick reference:

• Take the opportunity to educate the public about suicide
• Avoid language which sensationalizes or normalizes suicide, or presents it as a solution to problems • Avoid prominent placement and undue repetition of stories about suicide
• Avoid explicit description of the method used in a completed or attempted suicide
• Avoid providing detailed information about the site of a completed or attempted suicide
• Word headlines carefully
• Exercise caution in using photographs or video footage
• Take particular care in reporting celebrity suicides
• Show due consideration for people bereaved by suicide
• Provide information about where to seek help
• Recognize that media professionals themselves may be affected by stories about suicide

Jim Pumarlo, a former newspaper editor who writes a column for community journalists, writes in his most recent piece that they should consider approaching families of suicide victims for stories about the phenomenon.

"The sensitivity of suicide almost makes the subject taboo in general conversation, and it brings a feeling of guilt or embarrassment to mention in an obituary. That is unfortunate, because suicide truly is an epidemic as the statistics underscore," Pumarlo writes. "Suicides are the kind of news that should be reported if community newspapers truly are to be the recorder of local events – a living history of our home towns. They are necessary if community newspapers are to remain relevant and represent themselves as the source of local information."
Other resources for reporting on suicide can be found on the Reporting on Suicide website and the American Foundation For Suicide Prevention. The Association of Health Care Journalists has also put together a tip sheet to help journalist responsibly write about suicide.

Here are American Foundation for Suicide Prevention suggestions on how to write about suicide (click on the image for a larger version): 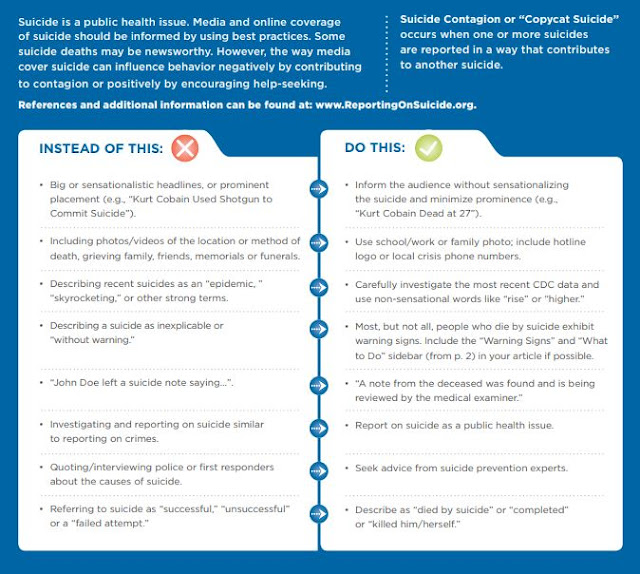 Posted by Melissa Patrick at 2:26 PM