Nov. 18, 2018: Story updated to reflect Living on Automatic: How Emotional Conditioning Shapes Our Lives and Relationsips was chosen by American Book Fest as a finalist for the "2018 Best Book Award" for best new non-fiction .

In a world inundated with interpersonal conflicts, a Kentucky psychiatrist has written a groundbreaking new book that explains what lies at the root of these conflicts and offers a way to resolve them. 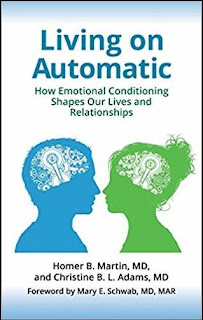 "It's a book that talks about why the things that go wrong in our relationships go wrong, and why we live on automatic pilot and do things that we sometimes don't even want to do, but we repeat them over and over again and we wish we could stop," Dr. Christine B.L. Adams, one of the book's authors, said in a telephone interview.

The book, Living on Automatic: How Emotional Conditioning Shapes Our Lives and Relationships, is a collaborative effort between Adams, a child psychiatrist in Louisville, and the late Dr. Homer B. Martin, her colleague and mentor. Adams said their landmark research around emotional conditioning is based on 80 combined years of psychotherapy with thousands of patients. It was recently chosen by American Book Fest as a finalist for the "2018 Best Book Award" for best new non-fiction.

The authors write that people are emotionally conditioned within the first two to three years of life by their parents or caretakers to fall into one of two roles that form the basis of their personalities.

But this isn't working, she said, pointing to how interpersonal conflicts have resulted in such high rates of divorce and substance abuse and increasing conflicts between parents and their children.

"So this says to me that the way we've been doing it has not been very successful and perhaps there is a better way," Adams said.

That way, she says, is for people to re-learn how to interact with each other in ways that promote better relationships. She calls it deconditioning, and explains it in the final chapters of the book.

"What you learn to adopt when you try to shed your conditioning is a standard of reasonableness rather than a standard of automatic conditioned responding," she said. "You have to learn a technique of evaluating yourself and the other person simultaneously in every exchange you have with them."

She added that this technique helps a person determine what is called for in each situation.

"In this way you don't automatically respond just to the role of the other person," she said. "You respond according to what each person needs for the particular situation at that particular time."

Adams said people who have gone through this process "have much better lives, are able to manage their lives better and have better relationships," and when one person goes through the process it typically has a "ripple effect" throughout a family and others who are close to them.

Beyond romantic relationships, Adams said the book also has applications for young parents to help them raise "more well-balanced" children, as well as help for agencies that work with children.

She said the book is written for a general audience, in hopes of bringing awareness to this new concept of emotional conditioning, and how this causes us to act on automatic pilot most of the time when it comes to our relationships.

"This is a landmark study of what really happens in relationships," she said. "And when you impart information to people that they've not known before, then a lot of people start thinking about it in new ways and will apply it to themselves and their family and their friends."
Posted by Melissa Patrick at 9:27 AM