Adair County newspaper looks at local syringe exchange, finds most of its clients are from Taylor County, which doesn't have one

The demand for syringe exchanges crosses county lines; if local governments haven't allowed one in a county where intravenous drug users live, some of them go to a county that does have one. For example, most clients of the exchange in Adair County (population 19,485) are from Taylor County (population 25,472). 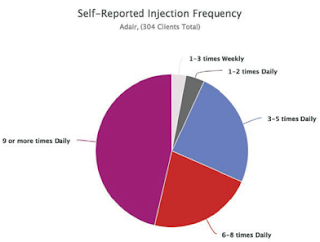 Sharon Burton of the Adair County Community Voice reported those figures after getting them from the Lake Cumberland District Health Department, which operates exchanges in Adair, Russell, Pulaski and McCreary counties, where local officials have authorized them.

The headline on her story said "Syringe program shows dire drug epidemic," and a front-page graphic from the health department showed how often IV drug users say they inject. Almost half said they do nine or more times a day.

"Of the people participating in the program in Adair County, 178 are from Taylor County (58.6 percent) while only 64 (21.1 percent) are from Adair," Burton reports. In Adair, "294 different people have participated in the program a total of 985 times since the program began in September 2017. . . . A total of 43,040 syringes have been dispensed and 29,065 collected. Participants are not required to bring in syringes on their first visit but are expected to bring them in during subsequent visits."

Tracy Aaron, the district's director of health education, "said the program has been very effective for several reasons," Burton reports. "It is reducing the spread of disease and people are reporting fewer needles in parks and on the streets, she noted. The program also connects participants to volunteer peer counselors, people who have successfully completed treatment themselves. In addition, the health district’s staff provides participants with information about treatment and counseling programs."

Burton adds, "Of 1,135 clients in the district who self-reported, a total of 420 participants (37 percent) reported injecting drugs at least nine times a daily. Another 339 reported using six to eight times daily and 270 reported using at least three to five times daily. A total of 317 clients reported testing positive for Hepatitis C," which is prevalent among IV drug users.

Monthly reports on the district's syringe exchanges are available online.
Posted by Al Cross at 10:41 AM