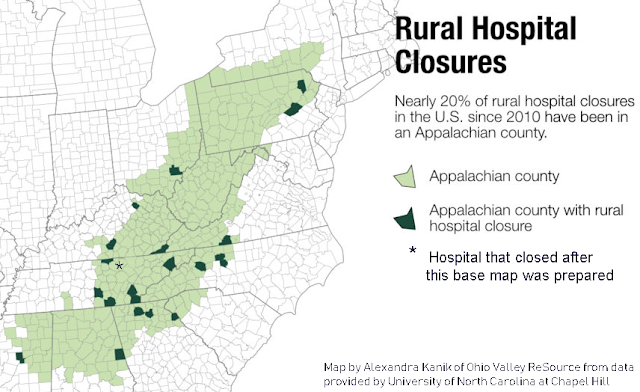 Rural hospital closures are a growing trend, and federal policies don't support a model that would include a scaled-back version of services. But that's what many rural hospitals need to do in order to ensure their future, Mary Meehan reports for Ohio Valley ReSource, a public-radio partnership that covers Kentucky, Ohio and West Virginia, especially their Appalachian areas.

But federal policy complicates that simplified model for care, Borders said: “Medicare won’t pay for that. Medicare will only pay for hospital or emergency department services that are in a hospital. And in most rural communities, that’s a critical-access hospital,” which limits its beds, services and patient stays in return for slightly larger federal reimbursements.

"Which are the hospitals that are closing," Meehan reports as she details the struggles and closures of several rural hospitals, starting with the Owen County Hospital in Owenton, which closed in 2016.

County Judge-Executive Casey Ellis told Meehan that over the years the hospital had operated for profit, not for profit, under a private owner and even under the support of a community foundation. It closed in 2016, but its emergency room continued operation under new management for 18 months.

“I have always seen it struggle,” Ellis said. “I grew up seeing it struggle.”

Such closures are part of a growing trend across the Ohio Valley and across the nation, Meehan notes. So far 107 rural hospitals have closed since 2010, according to the Cecil G. Sheps Center for Health Services Research at the University of North Carolina at Chapel Hill, and research shows the trend is accelerating. Four hospitals have closed in Kentucky since 2010, and several others are at risk of closing.

Meehan also writes about the Bell County seat of Pineville, where citizens ate "scrambling for options to save their hospital, even holding community prayer services."

"But troubles are of the earthly kind," she adds, noting that a declining population, old buildings and spending more on care than being reimbursed for it adds to the growing problem.

Meehan says research shows people are still getting the most critical care, but Ayla Ellison, managing editor of Becker's Hospital Review, told her that it can get more costly as caregivers become distant and must be transported farther to the nearest hospital, sometimes by helicopter.

Hosptials are often the largest employer in a county and are critical to its economy. Ellis told Meehan that about 50 people lost jobs when the Owen hospital closes, that it's hard to recruit jobs to a town with no hospital, and that as citizens age, they often move to communities nearer a hospital.

Ellis said the county has done what it can to help its 11,000 people across roughly 350 square miles, including developing 18 helicopter landing sites and by conducting a "huge campaign" on when and when not to call 911. The county has two ambulances to serve the entire county, Meehan reports.

“We can’t send a paramedic 20 minutes down the road to go see Miss Joe to change her bandage (and) talk about her medications” if that means risking a situation where no ambulance is available in a crisis, Dan Brenyo, the county's emergency-services administrator, told Meehan.

Jamestown Regional Medical Center, which had a staff of about 150, closed after it stopped receiving Medicare and Medicaid payments for new patients, Juan Buitrago reports for the Nashville Tennessean. County Executive Jimmy Johnson said the hospital missed a liability-insurance payment, worrying employees. CEO Michael Alexander told Buitrago that he hopes the hospital will be able to reopen. The next closest hospital, in Albany, Ky., is nearly 40 minutes away.

Rural hospitals are at a greater risk of closing in states that did not expand Medicaid under the Patient Protection and Affordable Care Act. Tennessee is one of the 14 states that have not done so; Kentucky did. According to the North Carolina research program, 12 rural hospitals have closed in Tennessee since 2010, three in 2019. A separate report shows that Tennessee has 15 rural hospitals at high risk of financial distress, and Kentucky has eight. The researchers' list is not public.

UPDATE, July 1: ABC News reports on the hospital closures in Celina and Jamestown, Tenn.
Posted by Melissa Patrick at 11:37 PM