Kentucky saw a nearly 15 percent drop in drug-overdose deaths in 2018, the first decline since 2013, and almost three times the national decline of 5.1%.

Most of the deaths were again caused by fentanyl, a synthetic opioid that can be up to 50 times more potent than heroin, according to the annual Kentucky Office of Drug Control Policy report. 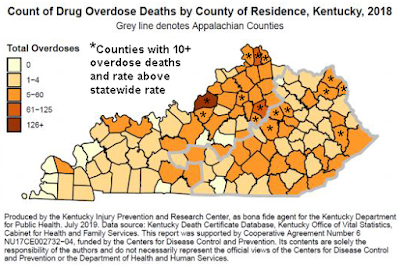 Van Ingram, executive director of the Office of Drug Control Policy, said in a news release that the overall decline was likely the result of the state's many policy initiatives, along with a growing awareness about the dangers of opioids and the threat of overdose.

“We’ve pushed hard to develop the most comprehensive approach possible, combining education and treatment with a multitude of other harm-reduction strategies,” Ingram said. “We still have a great deal of work to do, but it’s clear that Kentucky’s efforts are making an impact.”

Reflecting anecdotal law-enforcement reports, there was increase in deaths from methamphetamine, a stimulant that has long plagued Kentucky. It was found in 428 cases, up from 357 in 2017.

The report says overdose deaths from heroin declined in 2018 and did those from alprazolam, an anti-anxiety medicine that is often known by its brand name Xanax; and from gabapentin, which sells under the brand names Neurontin, Gralise and Horizant and is often taken along with other illicit drugs to enhance their effects.

Deaths related to the widely used pain medication oxycodone dropped to 110 from 157 respectively, or 30%.

“The numbers are trending down, but our state still faces incredible challenges,” Justice and Public Safety Cabinet Secretary John Tilley said. “This crisis claimed more than 1,300 lives last year and inflicted untold heartbreak on our families and communities. I only hope the latest numbers serve as evidence that strong interventions and better access to treatment can and do save lives."

Of the 1,333 deaths, 1,247 of them, or 93.6 percent, were Kentucky residents. County-by-county figures in the report are based on deaths of residents, and are adjusted for age.

Counties with fewer than 10 deaths were not included in the rate calculation, so the report have rates for only the 23 counties with 10 or more overdose deaths.

The state and its partners have launched a number of efforts to battle the state's opioid and substance-abuse epidemic, including the KY Help Call Center (1-833-859-4357), which provides information on treatment options and open slots among treatment providers and an online website that provides a similar service called FindHelpNowKY.org.

The Department of Corrections is overhauling the way it addresses substance abuse. Kentucky State Police have launched the Angel Initiative, which allows anyone with a substance use disorder seeking treatment to visit a KSP post, where they would be directed to treatment.

The General Assembly has passed several laws in recent years, including a crackdown on pain clinics, limiting opioid prescriptions for acute pain to a three-day supply (with exemptions), tougher penalties for heroin dealers and more funding for drug treatment and other response efforts.

A news release from Senate Majority Leader Mitch McConnell's office points out that Kentucky is also benefiting from nearly $200 million in federal money that he has helped to secure.

That includes an $87 million federal grant recently awarded to the University of Kentucky to address the opioid epidemic in 16 high-risk counties, which is the largest grant in the school's history and an indicator of the magnitude of the problem.

"I’ve made the fight to save lives from the horrors of addiction and abuse a top national priority," McConnell said in the release. "The results of our work at the federal and state level with our many local partners on the front lines are evident in today’s announcement."

Data for the report were compiled from the Kentucky Medical Examiner's Office, the Kentucky Injury Prevention & Research Center and the state Office of Vital Statistics.
Posted by Al Cross at 11:58 PM