Conference speakers call for a more aggressive approach to eliminate hepatitis; Ky leads the nation in both hepatitis A and C

Elimination of the three main types of hepatitis is possible, but will require a more aggressive approach that includes increasing vaccinations for hepatitis A and B and universal screening, non-restricted access to treatment and increased access to harm-reduction programs for those with hepatitis C.

That's been the unwavering message about the liver disease for the the last few years at the Kentucky Rural Health Association's annual Viral Hepatitis Conference, and it was again at the one held July 31 in Lexington.

Meanwhile, Kentucky leads the nation in both acute and chronic cases of hepatitis C and has the largest outbreak of hepatitis A in the nation, and how the state has managed these highly contagious liver diseases has come with both kudos and criticism.

Kentucky is often praised for its progressive response to hepatitis C, a chronic disease that is estimated to affect about 43,000 Kentuckian.

But about half of people with hepatitis C don't know they have it, according to Dr. Neil Gupta, chief of the Epidemiology and Surveillance Branch in the federal Centers for Disease Control and Prevention's Division of Viral Hepatitis. 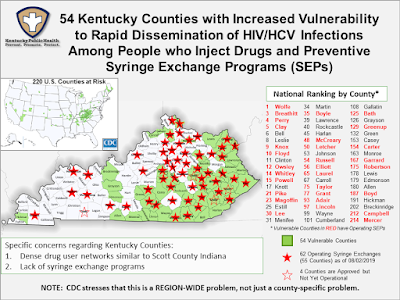 Kentucky is recognized nationwide for its embrace of syringe-exchange programs, which allow drug users to swap dirty needles for clean ones to thwart the spread of HIV and hepatitis C, as well as offering other "harm reduction" services. Most new hepatitis C cases result from drug users sharing needles.

As of June 2, Kentucky had 62 operating syringe exchanges in 55 counties, with four more approved but not yet operational.

Mike Selick, with the national Harm Reduction Coalition, pointed to other ways Kentucky leads the nation in harm reduction, including its Good Samaritan law, its standing order for a drug that is used to reverse opioid and heroin overdoses called naloxone, and its efforts to increase access to medication-assisted therapies (MAT) such as buprenorphine.

Kentucky got a "B" on the report card, "Hepatitis C: State of Medicaid Access," largely because it provides "moderate access" to treatment. The report, and several speakers at the conference, called for removal of specialist restrictions in treating hepatitis C and for managed-care organizations, which care for most Medicaid patients, to follow the Medicaid fee-for-service guidelines and not impose any restrictions for liver damage or sobriety for people seeking treatment for the first time.

Selick stressed that hepatitis treatment is safe and effective for people who inject drugs, pointing to research that shows reinfections rates in this population are low. Further, he said treating this population early in their infection becomes "treatment as prevention," because it would decrease the spread of the disease.

Jon Zibbell, senior public health scientist for RTI International, an independent, nonprofit research institute, noted that people who inject drugs present the largest population of new hepatitis infections, and that only 1 to 2 percent of them are being treated each year.

The state health department has launched a statewide hepatitis C elimination project to create a comprehensive and statewide strategic plan to eliminate the disease. It met for the first time July 29.

In 2018, Kentucky was the first state to pass a law to require all pregnant women to be tested for hepatitis C. The law also requires that the information be recorded in both the mother's and the infant's records, and that the child be tested at 24 months for the disease. One in 63 Kentucky births are to mothers who test positive for hepatitis C.

Gupta told the group that subject to change after public and peer-review comment, the CDC would be changing its guidance on hepatitis C screening next year to recommend it for all pregnant women, at least once in a lifetime for all adults, and periodic testing for people with risk factors.

The Kentucky Rural Health Association has started a nationally recognized provider training program called  the Kentucky Hepatitis Academic Mentorship Program, or KHAMP, which so far has trained over 100 providers to treat hepatitis C.

One of the challenges to treating hepatitis C is the cost, though an argument can be made that it is more expensive to care for these patients when they progress to late-stage liver damage, liver cancer or need a liver transplant.

Dr. Bennett Cecil, medical director of Hepatitis C Treatment Centers in Louisville and Russell Springs, told the group that the cost for a treatment has dropped to upwards of $30,000, down from about $80,000 several years ago.

Kathleen Winter, as assistant professor in the division of epidemiology at the University of Kentucky College of Public Health, offered some numbers to show the scope of the problem.

Winter also showed cost data from the Kentucky All-Payer Hospitalization Claims database that found in 2018 there were 2,973 hospital admissions for patients who had both hepatitis C and liver disease or liver cancer, and that these patients incurred more than $181 million in patient pre-negotiated charges. Adjusted, she said, that would be upwards of $90 million a year to treat chronic, late-stage hepatitis C.

It also found 68 admissions related to liver transplants associated with hepatitis C, which had $4.8 million in associated cost. She said most of these patients were either on Medicare or Medicaid.

While most of these patients were older, Winters pointed out that the largest burden of the disease is with younger adults, who are largely in the early stages of the disease process, and who if not treated will present a tremendous cost-burden to the health-care system in years to come.

Winter also presented her research on pregnant women on Medicaid with hepatitis C, which found that many of them could not correctly identify their hepatitis C status, even though they had been tested; many did not understand how the virus was transmitted; many knew it could be treated, but didn't know what that treatment entailed; many knew treatment was important, but had widespread misunderstandings about what Medicaid would cover -- which Winter said was also a widespread problem among medical professionals.

Kentucky has made great progress in decreasing its number of new hepatitis A cases, but not without criticism for what some say was a slow response to the nation's largest outbreak of the disease.

Since August 2017, there have been 4,793 cases of hepatitis A in Kentucky, with more than half of them hospitalized (2,311) and 59 dead from it, according to a weekly surveillance report. The primary risk factors for hepatitis A are drug use and homelessness.

Attorney General Andy Beshear, the second speaker of the day, was quick to criticize Gov. Matt Bevin's administration for its slow response to the hepatitis A outbreak. Beshear is running against Bevin in the Nov. 5 gubernatorial election.

To a room full of applause, Beshear first thanked Dr. Robert Brawley, the state's former infectious-disease chief, for his "courage in doing what is right," even though it cost him his job. Brawley is a volunteer with KRHA and was a co-moderator of the event.

Beshear was referring to Brawley's request that the state have a more aggressive response to the outbreak, including $6 million to buy more vaccines and $4 million for temporary health workers to help administer them. Brawley also called for the state to declare a public-health emergency as a way to get more federal funds, the Louisville Courier Journal reported.

Health Commissioner Jeffrey Howard didn't declare an emergency but sent local health departments $2.2 million and committed to seek more funding if needed. Howard and other state officials have defended their actions, citing that logistical challenges were greater than the need for more money as the outbreak spread to rural Kentucky.

Brawley, who was allowed to resign in lieu of being fired on June 4, 2018, has maintained his position that the state has not acted aggressively enough.

Beshear said, "I think when you also look at hepatitis, we see an absolute failure by the Bevin administration that cost people their lives. They had the information, they had the ability to respond in a real way for only about $10 million, but they didn't listen. Instead they had people inexperienced and incompetent in really important positions."

The health cabinet stood by its decisions, stating in an e-mail that their response to the outbreak "followed protocol and procedures guided by the CDC and informed by an entire DPH team."

"While hindsight might provide more context for some things now, in retrospect there's not a single decision that I'm aware of that has been made in real time, with the information available at the time, that I would change," Health Secretary Adam Meier said in the e-mail.

Howard, a physician, recently resigned as commissioner to pursue a fellowship in Washington, a spokeswoman from the cabinet told the Courier Journal.

Maria Hardy, the public health director at Ashland-Boyd County Health Department, painted a pretty grim picture of the financial cost associated with the outbreak. Boyd County has been one of the counties hardest hit by the outbreak, with an incident rate of 362.7 cases per 100,000 people.

Because many of the people testing positive for hepatitis A in Boyd County kept showing up in the food-service industry, at the health department's recommendation the county passed an ordinance requiring all food workers be immunized against hepatitis A.

Hardy said her health department's hepatitis A costs have been "devastating to budget." From January 2018 to June 2018, the agency spent $718,902, including the cost of salaries, vaccines and certified mailings. She added that the department got $183,520 from the state to buy more vaccine.

Looking to the future

To applause, Zibbell suggested that it was time to turn syringe-exchange programs into medical homes for people who use drugs, largely because of the stigma in traditional health-care settings against this population.

Dr. Daniel Moore, of the emergency-medicine department at UK HealthCare, said emergency departments must play a significant role in eliminating hepatitis C because they see the "downstream" effects of the disease and are the only places that most drug users interact with the health-care system.

Moore is conducting a grant-funded pilot study that allows him to screen every patient in the UK emergency department for hepatitis C. He said research shows that risk based screening would miss about 25% of people who would test positive for hepatitis c.

Between July 2018 and July 2019, he said the ED had done about 23,000 tests, with about 11% of them testing positive for ever having been exposed to hepatitis C and more than 50% of that group testing positive for an active virus. He added that 443 of these patients had been linked to care.

He said the next step toward elimination of this disease will be to bring drug treatment and hepatitis C interventions to the point of contact in the ED, just like they already do for patients who have had a stroke or a heart attack.

"This is a disease that has a cure," he said. "The patients are in front of me and there is a cure."
Posted by Melissa Patrick at 5:27 PM