Rural hospitals, already cut by Medicare, are about to get their Medicaid payments reduced, too; here's a partial Kentucky list

Hospitals in Kentucky and across the nation are getting a reprieve, maybe a short one, from a new formula cutting the money the federal government gives them to care for poor people.

The cuts in Medicaid were supposed to go into effect Oct. 1, but Congress passed a continuing resolution to fund the federal government that, among other things, includes a provision to delay the cuts until Nov. 21. President Trump signed the resolution Friday.

"We are hoping that it will be delayed permanently," Carl Herde, vice president of financial policy at the Kentucky Hospital Association, told Kentucky Health News.

The cuts are for "disproportionate share hospitals," which care for a significant number of uninsured and Medicaid patients. DSH payments under Medicare are already being cut.

The Centers for Medicare and Medicaid Services' final Medicaid DSH rule, issued Sept. 23, calls for payment reductions in fiscal years 2020-25, with a $4 billion cut in fiscal 2020 and $8 billion in each of the next four fiscal years. Federal fiscal years begin Oct. 1.

Those figures mean Kentucky hospitals' DSH payments in 2021 would be $60 million, 75 percent less than the 2018 total of $227 million, according to the Kentucky Hospital Association.

Rural hospitals in Kentucky would likely be hit hardest, since so many of their patients are on Medicare and Medicaid or have no health insurance. Almost one of every three Kentuckians is on Medicaid.

"The final method considers the rate of uninsured in each state, the number of Medicaid inpatients, the level of uncompensated care in the state and other budget-neutrality factors," Michael Brady reports for Modern Healthcare. "It also clarifies the definition of total hospital cost and specifies state data submission requirements. Lastly, it adjusts the weighting of certain factors required in the methodology by the Affordable Care Act."

Hospitals and providers agreed to take cuts after the Patient Protection and Affordable Care Act passed in 2010, because they assumed that the law would increase the number of people with insurance and decrease the number who couldn't pay their hospital bills.

"CMS issued a final rule in 2013 to implement cuts to DSH funding, but subsequent legislative efforts have delayed the federally required cuts," according to Becker's Hospital CFO Report.

CMS says its final DSH payment methodology “would mitigate the negative impact on states that continue to have high percentages of uninsured and are targeting DSH payments to hospitals that have a high volume of Medicaid patients and to hospitals with high levels of uncompensated care, consistent with statutorily required factors,” meaning the requirements of federal law.

Hospitals in Kentucky have already been hit by a separate round of DSH cuts from the Medicare program that will result in an estimated $77 million reduction by next year. 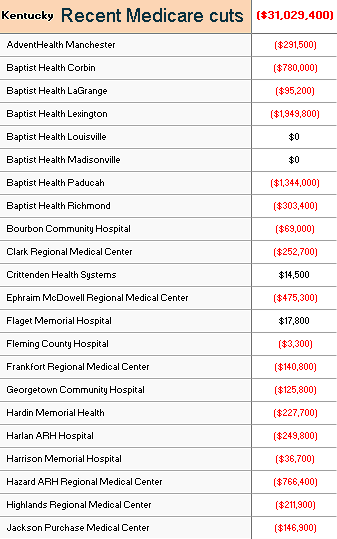 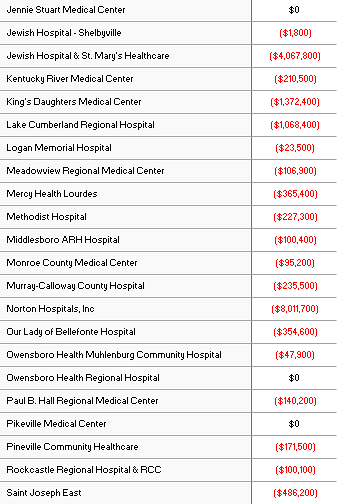 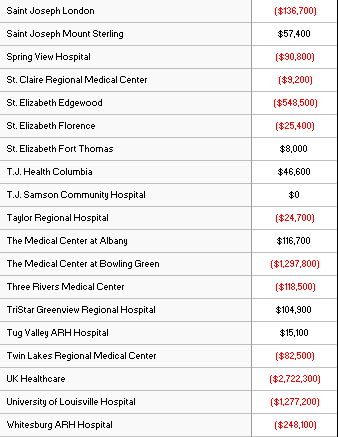 These cuts come because Medicare is no longer trying to mitigate what the industry calls the "Medicaid shortfall," or the difference between what Medicaid pays and the actual cost of care. That's a problem because Medicaid only pays 82% of the total cost of care, KHA says. The new formula now only includes charity care and bad debt.

But doing that shifts money from Kentucky and other states that expanded Medicaid to the working poor to states that didn't expand.

The Medicare DSH cuts are being phased in over two years. In the first round, Kentucky hospitals with the biggest cuts were: Norton Hospitals of Louisville, $8 million; Jewish Hospital & St. Mary's Healthcare of Louisville, $4 million; UK HealthCare, $2.7 million; and Baptist Health Lexington, nearly $2 million.

Cuts to rural hospitals were much smaller, but many have such small profit margins that they are at risk of closing, so any payment reduction is a concern.

For example, Pineville Community Healthcare in Bell County, which recently sold in a bankruptcy auction, saw a $171,500 cut.

The second round of Medicare DSH cuts are in motion.

A report by Navigant Consulting in February concluded that 16 of Kentucky's rural hospitals, one-fourth of the total, are at high risk of closing unless their finances improve. The report does not name the hospitals. Since 2009, five rural hospitals in Kentucky have closed, according to the Sheps Center for Health Services Research at the University of North Carolina, which tracks such closures.

The table of Medicare cuts is from the Kentucky Hospital Association and shows the first round of cuts for hospitals other than critical access hospitals, which operate under different rules.
Posted by Melissa Patrick at 10:11 PM