Kentucky's children improved on several health measures in last year but still lag behind nation; many counties are far behind

More Kentucky children than ever have health insurance, fewer Kentucky teens are getting pregnant, fewer mothers are smoking during pregnancy, and the state has fewer low-birthweight babies – but that's not the case in every county, according to the annual Kentucky Kids Count report.

The report, released Tuesday by Kentucky Youth Advocates, is part of the 27th annual release of the County Data Book, which provides data on overall child well-being through 17 measures in four areas: economic security, education, community strengths, and health and family.

Instead of ranking counties from top to bottom for each of these measures, as in the past, this year's report shows whether the outcomes have improved or worsened in the last five years.

"Looking at data change over time illuminates areas of progress and areas of needed policy change and investment," KYA Executive Director Terry Brooks said in a news release. “If all of our kids—no matter their families’ income, skin color, or ZIP code—are to grow up to be healthy and productive citizens, their needs must be prioritized.”

The report also shows how many Kentucky children would be affected if the state or county were able to improve each measurement by 10 percent. KYA's hope is that this will help the state and individual counties see what areas need attention the most.

For example, the report shows Kentucky has seen a 13 percent decrease in the rate of births to mothers who smoked during pregnancy, dropping to 20.6 percent in 2013-15 from 23.8 percent in 2008-10. The national rate is 8.4 percent, according to the 2017 State Health Assessment.

If 10 percent fewer women smoked during pregnancy, 3,533 fewer babies would be exposed to cigarette smoke before birth, which would result in fewer babies with low birthweights. Such babies  (less than 5½ pounds) account for 8.7 percent of Kentucky births.

Being born too early or with low birthweight increases a baby's risk of health complications, including a 25 percent increased risk of dying in the first year of life.

For example, Lee County has the highest rate of smoking during pregnancy (47.7 percent) and one of the highest rates of low-birthweight babies (12.2 percent). A 10 percent improvement of these measures would result in 11 fewer Lee County babies being exposed to smoke before birth each year, and three fewer babies being born with a low birthweight.

On the other end of the spectrum, only 10.2 percent of mothers smoke during pregnancy in Oldham County, and only 7.4 percent of the babies born there have a low birthweight.

The Foundation for a Healthy Kentucky, which is leading the state's newly formed Coalition for a Smokefree Tomorrow, says it's ready and willing to help counties decrease their smoking rates.

“The foundation is committed to working with advocates and local communities to promote smoke-free ordinances, ensure that expectant mothers have easy access to effective tobacco treatment, and raise the state tax on cigarettes to reduce youth smoking," Ben Chandler, president and CEO of the foundation, said in the news release. 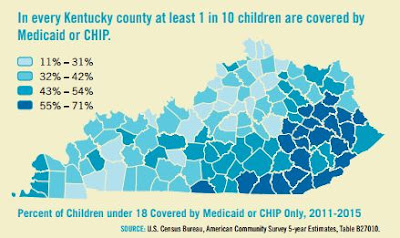 Other encouraging news is that almost all Kentucky's children (96 percent) have health insurance. The report says at least one in 10 Kentucky children are covered by Medicaid or the Children's Health Insurance Program, called K-CHIP in Kentucky.

The report stresses the importance of making sure Medicaid and CHIP program are sustainable – including the expansion of Medicaid under the Patient Protection and Affordable Care Act to those who earn up to 138 percent of the federal poverty line. It notes, "Children are more likely to have health insurance when their parents do."

The report also says coverage for children "boosts family financial stability due to reduced out-of-pocket costs for health care and increased participation in other supports for which they are eligible, such as Supplemental Nutrition Assistance Program," or food stamps.

The U.S. House of Representatives has passed a bill to fund CHIP for the next five years, but it includes funding provisions that likely won't pass the Senate. A Senate committee has passed a CHIP bill, but without provisions for funding. The deadline for reauthorization was Sept. 30.

Kentucky will run out of KCHIP money in about five months if CHIP is not renewed. A Kaiser Family Foundation report shows that the federal budget for CHIP was about $14 billion in 2016 and Kentucky's federal share was around $243 million. (For a county-by-county list of KCHIP and Medicaid enrollment, click here.)

The report also called for more outreach and enrollment efforts, and said the state should stop dis-enrolling children for incorrect or missing addresses.

Other key findings about Kentucky's children in the report:
Brooks concluded: “Kentucky kids rely on their state leaders to make decisions and investments that prioritize them. As state agencies, the legislature and governor craft the next biennial budget and prepare for the 2018 session, we are calling on leaders to build a budget that invests in kids’ education, health, economic security, and safety. Our communities and economy can only win when Kentucky kids and their families succeed."

The Kids Count Data Center is also available for a deeper dive into the data. It offers a profile sheet for every county, and allows you to create maps, graphs, and make comparisons.

The 2017 County Data Book was made possible with support from the Annie E. Casey Foundation and local sponsors Passport Health Plan, Delta Dental of Kentucky and Kosair Charities.
Posted by Melissa Patrick at 6:50 PM