Both Affordable Care Act insurers in Kentucky seek rate hikes; Anthem is returning to 17 unspecified counties, for a total of 76

The two health insurers offering government-subsidized health plans in Kentucky's individual market for 2019 are both requesting an overall rate hike, the most popular one seeking increases averaging 3.5 percent and the other asking for 19.4 percent.

Insurers offering plans for small groups under the Patient Protection and Affordable Care Act are asking for average hikes of nearly 11 percent. These overall percentages reflect an average that will vary, depending on whether individuals smoke, how old they are, and where they live. 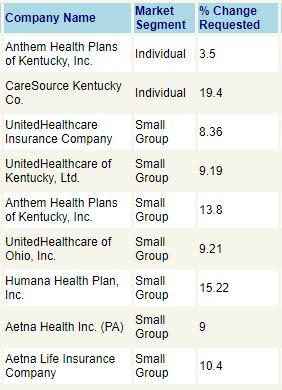 Anthem Health Plans, which has covered most of the ACA-subsidized customers in Kentucky, requested an average 3.5 percent increase for its 13 different plan offerings.

Anthem has also asked to expand its service area to include 17 more counties. If approved, that would increase its footprint from 59 counties to 76. Materials made public by the state Department of Insurance did not list the counties; an Anthem spokesman told Kentucky Health News that it was not releasing the list yet "for competitive reasons."

CareSource of Kentucky, which covers the remaining 61 counties, submitted rate increases averaging 19.4 percent for its 12 plans, with no change in the counties it serves.

The requests are preliminary and subject to change. The Insurance Department can approve, lower or raise the rates. The department said in a press release that it expects to finalize the rates by late August.

“The initial rate increase percentages for 2019 are not as high as in previous years and some policyholders could see rate decreases,” Insurance Commissioner Nancy Atkins said in the release.

Last year, Anthem asked for an average 34.1 percent increase and CareSource asked for a 20.8 percent hike, and the Insurance Department gave both more than they asked for: increases averaging 41.2 percent and 56 percent, respectively.

Kentucky had 89,569 residents enroll in subsidized coverage through its health-benefit exchange and HealthCare.gov during the 2018 open enrollment period. That was more than a 10 percent increase over the 81,155 who had enrolled in 2017, but lower than the 2016 and 2015 totals: 93,687 and 106,330, respectively. The state shifted enrollment to the federal exchange in 2016, away from the state-based exchange called Kynect.