Kentuckians are encouraged to let the pros handle the fireworks; even sparklers, firecrackers and bottle rockets are dangerous

Fireworks are often synonymous with the Fourth of July, but they are also a common cause of injury, so the state Division of Fire Prevention recommends attending a community firework event instead of celebrating with fireworks at home.

"Let the professionals entertain your family," Mike Haney, state fire marshal and director of fire prevention for the Department of Housing, Buildings and Construction, said in a news release. "By celebrating at a public event instead of at home, you reduce the risk of injury and property damage. You may also avoid violating the law."

The latest U.S. Consumer Product Safety Commission fireworks report found that in 2017, 12,900 consumers were treated in U.S. emergency rooms for fireworks-related injuries and eight people died from them, with  victims ranging from age four to 57. Seven of the deaths were a result of direct impact from fireworks and one of them was the result of a house fire caused by misusing a firecracker.

For example, state law prohibits people under 18 from buying fireworks, and from selling them unless supervised by a parent or guardian. The law bans fireworks from being used within 200 feet of a structure, vehicle or other person; and fireworks cannot be sold to anyone who is under the influence of drugs or alcohol.

"Local governments set their own firework ordinances, so be aware of the regulations in your own town," Haney said.

Here are some safety tips from the National Council on Fireworks Safety:

* Read and follow the instructions on the label.
* A responsible adult should supervise all firework activities.
* Never allow children to play with or ignite fireworks.
* Alcohol and fireworks do not mix. Have a "designated adult shooter."
* Wear safety glasses when shooting fireworks.
* Light one firework at a time and then quickly move away.
* Never light fireworks in a container, especially a glass or metal container.
* Use fireworks outdoors in a clear area away from buildings and vehicles.
* Always have a bucket of water and charged water hose nearby.
* Never relight a "dud" firework; wait 20 minutes and soak in a bucket of water.
* Do not experiment with homemade fireworks.
* Wet down used fireworks and place them in a metal trash can.
* Place disposed of fireworks away from buildings or combustible materials.
* Report any illegal explosives to the fire or police department.

The CPSC report says that on average,  280 people went to the emergency room every day with fireworks-related injuries in the month around the July 4th holiday in 2017, with about 1,200 of those visits related to sparkler injuries, 800 of them relate to firecrackers and 300 related to bottle rockets.

Michael Spencer, a pilot from Bowling Green, told attendees of a CPSC fireworks event about the dangers of fireworks, having lost several fingers on both hands in 2015 from a shell-and-mortar style firework device. Spencer is now committed to making sure this doesn't happen to anyone else, CPSC writes in a news release about its latest fireworks report, released June 27.

“Fireworks can be extremely dangerous, even if they are legal,” Spencer said in the release.“My advice would be to leave them to the professionals.” 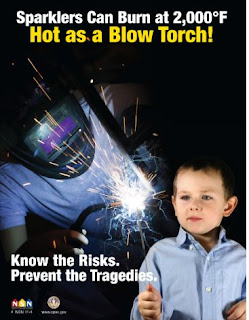 KidsHealth also stresses that kids should "never play with fireworks," writing that this includes "firecrackers, rockets and sparklers" because they are "just too dangerous."

"If you give kids sparklers, make sure they keep them outside and away from the face, clothing and hair," they write. Sparklers can burn at nearly 2,000 degrees Farenheit and bottle rockets are known to stray off course or to throw shrapnel when they explode.

If a person is injured by fireworks, KidsHealth says to immediately seek medical care.

If the injury is to an eye, KidsHealth says not to rub it, since that may cause more damage; don't flush the eye with water or to put any ointment on it. Instead, cut out the bottom of a paper cup, place it around the eye, and get medical care right away, because your eyesight may depend on it.

If a person is burned, KidsHealth recommends removing the clothing from the burned area and to call your doctor immediately.
Posted by Melissa Patrick at 1:57 PM