Despite some improvements, Kentucky continues to rank near the bottom of all states for senior health

Kentucky ranks 48th for seniors' health in the most recent America's Health Rankings Report -- a potential source of great concern, since the senior population in Kentucky, and the rest of the nation, is only growing larger. Only Mississippi and Louisiana ranked worse than Kentucky.

The U.S. Census Bureau estimates that one in five Americans will be over the age of 65 by 2030, and by 2035, seniors will outnumber children younger than 18.

The report looked at 34 measures of senior health that included factors that influence health, which were broken into four categories: behaviors, community and environment, policy and clinical care, and health outcomes. Kentucky also ranked 48th in both of these broad categories. 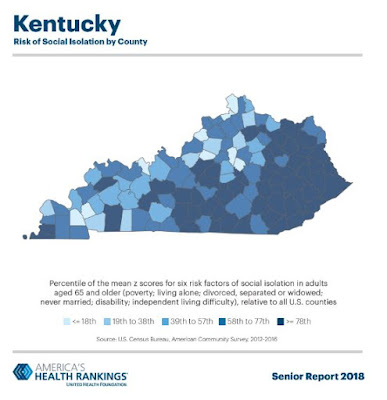 It also highlighted two supplemental measures, senior suicide and risk for social isolation, which has been linked to increased mortality, poor health status and greater use of health-care resources.

The report found Kentucky seniors are at a high risk for social isolation, scoring in the bottom 10 states for four of the six indicators used to measure this risk, including seniors who are divorced, separated, or widowed; poverty; disability, and difficulty living independently. This indicator was also broken down by county. (See map.)

Despite their low health ranking, Kentucky's seniors have shown many improvements on the health front and have some solid strengths.

For example, the report found that only 4.5 percent of Kentucky seniors are heavy drinkers and only 6.9 percent who require a low amount of care are in nursing homes, ranking the state seventh and eighth, respectively.

Kentucky also ranked high for the percentage of seniors with prescription-drug coverage, 87 percent; those with a dedicated health-care provider, 95.2 percent; and diabetes management, 81.6 percent.

And while many Kentucky senior-health measures ranked near the bottom, they showed some improvement. For example, senior dental visits, which ranked 44th in the nation, rose to 58.6 percent from 57 percent in 2017; the number of home-health workers per 1,000 adults 75 and older (45th) increased to 62.6 per 1,000, from 56.5; the percentage of adults having teeth extracted (47th) decreased to 22 percent from 23.9 percent; and the number of nursing home beds with four- and five-star ratings (45th) increased to 35.6 percent from 29.5 percent in 2017.

Smoking plagues every age group in Kentucky, with Kentucky seniors ranking 49th for for this measure, at 12.4 percent -- though the researchers say it's never too late to quit.

"Cessation, even in senior smokers, can have profound benefits on current health and long-term outcomes," the report says. "For example, the risk of dying of lung cancer drops by half 10 years after cessation."

Kentucky also ranks near the bottom for its low number of "able-bodied" seniors, 57.7 percent, compared to the national average of 64.8 percent; and its high number of preventable hospitalizations, 76.6 per 1,000 Medicare enrollees.

And though Kentucky's flu vaccination rate is higher than many states, the number of Kentuckians who got vaccinated this year dropped 12 percentage points, from 67.3 percent to 59.4 percent.

This is important because "around 71 to 85 percent of flu-related deaths occur in individuals aged 65 and older, and half of flu-related hospitalizations were among older adults in 2015-16," says the report.

Kentucky also ranks low, 44th, for the number of seniors who were enrolled in hospice during the last six months of life after a diagnosis that held a high probability of death: only 43.4 percent. In the state with the highest health ranking, Utah, nearly 66 percent who met this criteria enrolled in hospice.

Food insecurity is also an issue for Kentucky seniors, with 18 percent saying they had faced the threat of being hungry in the past 12 months.

Kentucky ranked 49th for home-delivered meals to seniors, delivering only 3.8 meals per 100, compared to the national average of 9.1 per 100. Utah, ranked first for senior health, delivered 19.1 meals per 100; New Hampshire, ranked second, delivered 33.7 meals per 100.

The report also shows Kentucky ranks 39th for the share of seniors (49.1 percent) who participate in the Supplemental Nutrition Assistance Program, formerly called food stamps; only 42 percent of eligible seniors participate in the program.

"The purpose of the report is to promote data-driven discussions among individuals, community leaders, the media, policy makers and public health officials that can drive positive change and improve the health of seniors," says the report.

Posted by Melissa Patrick at 4:02 PM