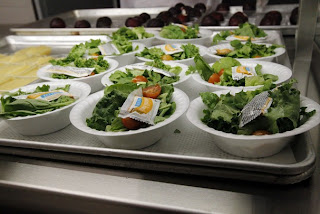 It can be done. A determined state can move the needle on its obesity numbers. Heidi Hall of The Tennessean reports that widespread efforts to change Tennesseans’ diet and exercise habits mean that the state’s percentage of obese residents have dropped for two consecutive years – something that hasn’t happened in more than a decade. "A new report from the Centers for Disease Control and Prevention moves Tennessee out of the top 10 most obese states for the first time since 1999 – it’s now ranked 15th – and," Hall notes, "is prompting cautious optimism in leaders charged with slimming down the state." (Associated Press photo)

The question, writes Hall, is what pellets of the state's shotgun approach are working. In a state that added bike lanes and sidewalks, altered its school lunches, and added fresh produce to convenience stores, where should credit go? “I think the biggest success is that we increased awareness around the issue,” said Ted Cornelius, the Tennessee Obesity Task Force’s co-chair. “We have the capacity to analyze barriers people face -- cost, access to healthy food and places to be active -- and we keep bringing those up to leaders in communities.”

The percentage of Tennesseans considered obese peaked at 32.9 percent in 2009 and dropped to 29.2 percent last year. Rural areas lead the drop, moving from 70.7 percent overweight in 2009 to 64.7 percent last year, but Schlundt said it may not be time to celebrate just yet. Rural residents took a similar jump upward from 2005-06, and both could be anomalies because the CDC surveyed fewer rural residents. (Read more)
Posted by Amy Wilson at 1:11 PM