Ky. has plan to keep Zika virus out of state, but needs your help; travelers to Zika-affected areas need to take precautions

State officials launched a mosquito prevention campaign May 9 at the Kentucky State University Research Farm near Frankfort as part of the state's efforts to combat the Zika virus, with an emphasis on the need for Kentuckians to do their part at home and when they travel.

To date, six cases of Zika have been confirmed in Kentucky, all in people who were infected abroad and then returned to the U.S. But Glisson said it is "very possible" that Kentucky could have a local outbreak because the state has the species of mosquito that transmits the virus.

Of the 59 mosquito species in Kentucky, only one, Aedes aegypti, a small, black mosquito that bites mostly during the day, has been confirmed as a Zika carrier, and it is "very rare," accounting for "roughly one out of every 5,000 or so mosquitoes that we catch here in Kentucky," said Grayson Brown, director of the Public Health Entomology Laboratory at the University of Kentucky. However, Brown said six or seven other species in the state could be Zika transmitters, including the state's most common monquito, Aedes albopictus, better known as the Asian tiger mosquito.

The major concern is that a Zika-infected person will return to the U.S., get bitten by a mosquito that can transmit it to the next person it bites, with the cycle continuing.

Symptoms of the virus include fever, rash, joint pain and red eyes, although about 80 percent of people who are infected with the Zika virus never show symptoms.

Those in greatest danger from the infection are women in early pregnancy. Infants born to Zika infected mothers are at high risk for microcephaly, a condition where the infants head is smaller than normal, as well as other possible severe fetal brain defects. It has also been associated with Guillain-Barre syndrome, a rare disorder in which the body's immune system attacks its nerves, in adults. The World Health Organization has declared Zika an international health threat.

Dr. Ardis Hoven, infectious disease specialist with the Kentucky Department of Public Health, urged travelers to protect themselves from mosquitoes by using EPA-approved repellents and wearing protective clothing while in affected areas, and doing so for three weeks after returning home to prevent transmission to local mosquitoes.

"If everyone does this, it greatly reduces the risk of Zika ever getting into Kentucky's mosquito population," said Hoven, who is also chair of the World Medical Association. "We are counting on you, so please take this advice seriously."

The state has created an extensive action plan to monitor Zika infected mothers and their infants that includes a monitoring schedule, and access to many social and healthcare services as needed. The state health department has reported that one of the confirmed Zika cases in the state is a pregnant woman.

Hoven advised pregnant women to not travel at all to affected areas and specifically said, "Pregnant women should not attend the Olympics," which will be held in Rio de Janeiro in August.

Concerns about Zika in Rio prompted Amir Attaran, a professor in the School of Public Health and the School of Law at the University of Ottawa, to write a commentary for the Harvard Public Health Review, calling for the Olympic Games to either be postponed or moved to another country.

"Does it really make sense to send a half-million [Olympic tourists] into Rio, which is, to be very clear, not the fringes of the outbreak? It's the heart of the outbreak," Attaran told NPR. "But is it at the end of the day sensible to run the risk of a global epidemic of, let's face it, brain-damaged babies, when that could be avoided by simply postponing the games or moving them elsewhere?"

Attaran, whose wife is from Brazil, told NPR that while the risk is quite low for individual athletes or individual tourists, "when you multiply (that) by 500,000, the odds are extremely high that somebody will take the disease elsewhere and seed a new outbreak."

Zika can also be transmitted sexually, which has occurred about 10 times now in the United States, Hoven said. 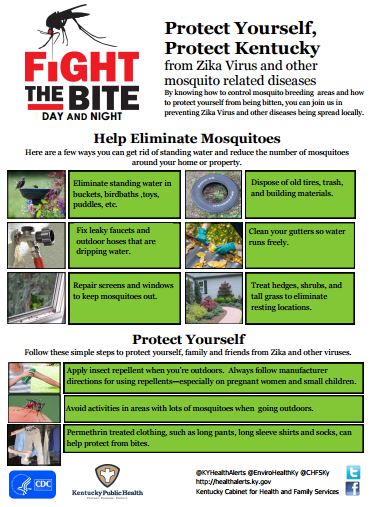 Wood also said couples should take steps to prevent conception for at least eight weeks after returning from a Zika-affected area, and women should not travel to such areas eight weeks before they are trying to conceive.

State officials urged Kentuckians to be vigilant about mosquito control and reminded them to remember the "3 D" approach to decrease the risk of infection by mosquitoes:

Hoven said, "As with all public health issues, the best form of protection is prevention, not clean-up."

The University of Kentucky College of Agriculture website has the latest updates on Zika and its spread.
Posted by Melissa Patrick at 1:53 PM