Kentucky is one of only 2 states where adult obesity rose last year; now we're fifth in the nation; state diabetes rate highest ever

We're fat, and getting fatter. And that's making us sicker.

More than one-third of Kentucky adults are obese, placing the state fifth in the country in obesity, a big jump from 12th the year before. Kentucky was one of only two states where obesity rates increased from 2014 to 2015, according to the latest State of Obesity report.

“Obesity remains one of the most significant epidemics our country has faced, contributing to millions of preventable illnesses and billions of dollars in avoidable health care costs,” Richard Hamburg, interim president and CEO for Trust for America's Health, said in a news release.


"Obesity continued to put millions of Americans at increased risk for a range of chronic diseases, such as diabetes and heart disease, and costs the country between $147 billion and $210 billion each year," says the release.

The report, "The State of Obesity: Better Policies for a Healthier America," is conducted by Trust for America's Health and the Robert Wood Johnson Foundation and is based on data from the federal Centers for Disease Control and Prevention's Behavioral Risk Factor Surveillance System, a continuous national poll.

The report found that black Kentucky adults were the most likely to be obese, at almost 43 percent, followed by whites (32.9 percent) and Latinos (24.3 percent). There was little difference between men and women. 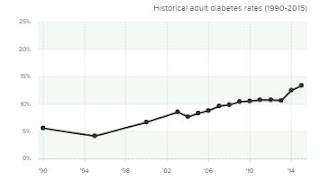 "Diabetes is the seventh leading cause of death in the United States, accounting for around $245 billion in medical costs and lost productivity each year," says the report.

The state's high-blood-pressure rate, at 39 percent, is about the same as the year before. The state ranks sixth in this measure. The report projects that 1,175,750 Kentuckians will have high blood pressure in 2030.

"Approximately 30 percent of hypertension cases may be attributable to obesity, and the figure may be as high as 60 percent in men under age 45," the report says. "People who are overweight are more likely to have high blood pressure, high levels of blood fats and high LDL (bad cholesterol), which are all risk factors for heart disease and stroke."

The report also updated high-school obesity rates and found that Kentucky's 18.5 percent was about the same as the last time such data were gathered in 2013. But because some other states' rates went up, Kentucky no longer ranks first in the nation. We're third. 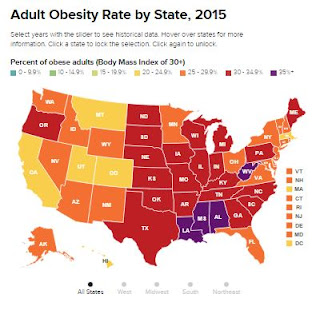 Kansas and Kentucky were the only two states to see obesity increases in 2015. Most remained steady, and four states saw a drop: Minnesota, Montana, New York and Ohio.

The authors outline a set of policy recommendations to combat obesity, including: investment in obesity prevention; focusing on early-childhood and school-based policies and programs that support healthier meals, physical activity and less screen time; prioritizing active transportation planning and access to healthy foods in communities; and covering a full range of obesity prevention, treatment and management services under all public and private health plans.

“These new data suggest that we are making some progress but there’s more yet to do. Across the country, we need to fully adopt the high-impact strategies recommended by numerous experts," Hamburg said. "Improving nutrition and increasing activity in early childhood, making healthy choices easier in people’s daily lives and targeting the startling inequities are all key approaches we need to ramp up."
Posted by Melissa Patrick at 9:33 PM

Video and audio spots to help prevent spread of coronavirus are free for all to use; themes are prepare, protect and disinfect