Sipping on sugary drinks ruins teeth, perhaps more from the acid in them; it's almost as corrosive as battery acid, VA dentist says

Many of us constantly sip on a soft drink, especially in Kentucky, but the habit could be ruining our teeth.

Most soft drinks have sugar, acid or both and repeated exposure to this combination "wears down tooth enamel, which leads to decay and, eventually, tooth loss," Patrick Reed reports for Kentucky Educational Television.

This "sugar-acid double punch" is especially dangerous for soda drinkers, and particularly to those who sip on them constantly - leading to what is often referred to as "Mountain Dew mouth," a phenomenon most common in Appalachian Kentucky.

As part of KET’s "Inside Oral Health Initiative," funded in part by the Foundation for a Healthy Kentucky, several Kentucky dentists offered tips on how to minimize the effects of sugar and acid on the teeth.

It's an important topic in Kentucky, because the state ranks fifth in daily consumption of soft drinks and fruit drinks, with 43.2 percent of people in the commonwealth, according to the federal Centers for Disease Control and Prevention.

Tooth enamel, which covers the visible, outer portion of the tooth, "is the strongest material in the human body and can keep teeth healthy for a lifetime," Reed writes. However, repeated exposure to sugar and acid will cause it to erode, and once it's gone, it's gone.

“On a scale of 1 to 10, if battery acid is a 1, then most soft drinks are a 2. That’s how acidic they are,” Robert Henry, chief of dentistry at the Department of Veterans Affairs Medical Center in Lexington, told Reed. “If you add sugar on top of that, you’re just setting up an environment that’s acidic,” he adds. “And then the sugar moves in and basically does the rest. It’s literally like throwing kerosene on an open flame.”

Reed said the erosion is intensified by repeated exposure to not only soda, but also any sugary drinks such as fruit juice, sports drinks, and energy drinks. And while diet soda seems like a good idea because it lacks sugar, many brands contain acid.

"If you take one sip of soda, it’s going to take three to four hours for your mouth to go to a pH of neutral,” Pikeville dentist Bill Collins told Reed. “So, if you’re sipping every 15 to 20 minutes, your acidic level in your mouth is down to a pH of 1 or 2. And you’re keeping it there, and it basically dissolves the enamel on your teeth.” (The numerical figure for neutral is a pH of 7). 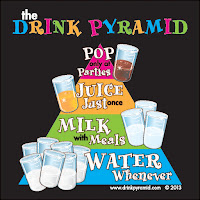 Practicing in Eastern Kentucky, Dr. Collins and Dr. Nikki Stone of the University of Kentucky told Reed that even very young children in the region have a habit of sipping soda.

“Drinking pop is our culture – we have an actual ‘pop culture’ in Eastern Kentucky,” said Stone, who has created a "Drink Pyramid" graphic to educate children about healthy habits. It says soda should only be consumed at parties or on weekends.

Tips for reducing the impact of sugary drinks

Posted by Melissa Patrick at 8:24 PM