Senators seek a guarantee that the House won't pass the bill McConnell may have them pass; they want to keep talks going

A stripped-down version of a health-insurance bill won't pass the Senate unless House Speaker Paul Ryan guarantees that the House will take the issue to a House-Senate conference committee and not pass the so-called "skinny repeal" into law.

That became clear late Thursday afternoon, when Republican Sens. John McCain of Arizona, Lindsey Graham of South Carolina, Ron Johnson of Wisconsin and Bill Cassidy of Louisiana said they would not vote for the limited bill without such a guarantee. Since Democrats are solidly against such a measure and 52 of the 100 senators are Republicans, three "no" votes would kill the bill.

Several hours later, Ryan issued what The Washington Post called "a measured statement," with this key passage: “If moving forward requires a conference committee, that is something the House is willing to do. The House remains committed to finding a solution and working with our Senate colleagues, but the burden remains on the Senate to demonstrate that it is capable of passing something that keeps our promise.”

McCain replied, “I would like to have the kind of assurances he didn’t provide.” But Graham said he would trust Ryan, The New York Times reported.

After Ryan's statement, McConnell offered limited legislation that would repeal the individual and employer mandates and the preventive health-care funding of the Patient Protection and Affordable Care Act, and suspend for three years its tax on medical devices. It would also give states more flexibility in operating their Medicaid programs. McConnell has been unable to get 50 votes to pass a more comprehensive bill. Vice President Mike Pence's tie-breaking vote earlier this week was only to put a bill on the floor and start debate.

"McConnell made one last frantic plea to his Senate Republican members to advance the party’s scaled-back Obamacare repeal, assuring them at a private lunch that the vote is merely aimed at getting to conference with the House rather than preparing it to land on President Donald Trump’s desk," Politico reports. "But Graham said McConnell could not offer a promise that Ryan would do so." That echoed concern among Republican senators that the House was adopting a procedure that would allow it to "quickly take up and pass" the bill.

Republicans "could try to salvage a bigger repeal-and-replace bill in House-Senate negotiations," Dylan Scott of Vox writes. "That would put Medicaid back on the table for cuts and surely lead to bigger coverage losses than skinny repeal alone. The uncomfortable truth for these Republican senators is they've been trying to do the latter for the past two months and they haven't been able to do it. It's not clear how adding the House to the mix could possibly help."

Any bill reported by a House-Senate conference committee would go back to both houses for approval and would not be subject to amendment.

"So in a matter of hours, we could be heading into drawn-out conference negotiations — or skinny repeal could be the law of the land," Scott writes. To show how divided Republicans are, he relates what Johnson and Sen. Rand Paul of Kentucky told him in the past two days. "Paul supports skinny repeal and wants the repeal-and-replace bill to stay dead. Johnson feels very differently."

Here's what Paul said about the idea of passing skinny repeal in order to take the issue a conference committee:

"I'm gonna advocate that if we can get some repeal, that we just send it to the House for approval because I think if it goes to conference committee, it's gonna get built back up into the monstrosity that we just voted down. If we end up with a $300 billion insurance subsidy fund, I think conservatives will vote against that also. . . . If it goes to conference committee and it explodes in its breadth and expense, they're gonna have trouble getting the votes."

And here are Scott's quotes from Johnson, who was the last senator to vote to start debate:

Johnson said one Wisconsin family had to repay $15,000 in ACA subsidies because their income ended up being higher than they expected. "I don't see anything in any of these bills that really addresses those forgotten men and women," he said.

Here is Vox's chart of the Congressional Budget Office estimates of annual growth in the uninsured population as potential results of each major bill that has been debated: 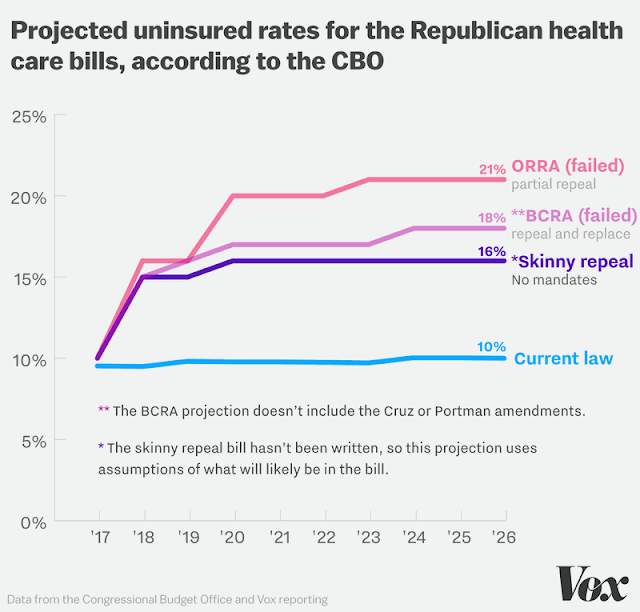