Survey of Kentucky 10th graders finds less use of drugs, alcohol and electronic cigarettes, but use of tobacco remains high

Kentucky 10th graders are reporting less use of drugs and alcohol, but continue to smoke cigarettes and use smokeless tobacco at a "significantly higher" rate than their national counterparts.

Those are among the findings of a recent survey, which also found that suicide rates among the state's high-school sophomores are slightly higher than they were in 2014.

The biennial "Kentucky Incentives for Prevention" survey is given to students across the state in even-numbered grades starting in the sixth grade, but the report says it only offers statistics from 10th graders "since this is likely the most accurate indicator of levels of use for high-school students."

The 2016 survey includes information from about 28,000 students in 149 of the state's 173 public school districts, but did not include the state's two largest districts. In addition to the Jefferson and Fayette county schools, Meade, Warren, Morgan, Laurel and Martin counties did not participate. 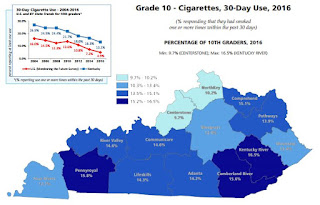 The report found that 13.1 percent of Kentucky high-school sophomores reported smoking cigarettes one or more times in the 30 days prior to the survey, compared to 4.9 percent nationally.

Smokeless-tobacco use among 10th graders was nearly three times higher than the national rate, 9.7 percent compared to 3.5 percent nationally. However, electronic-cigarette use among saw a decrease, dropping to 11.4 percent in 2016, down almost 5 percentage points from 2014. 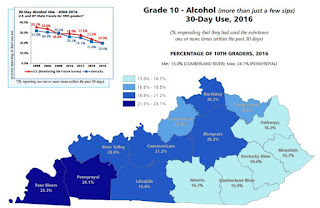 Other good news: Alcohol use among Kentucky sophomores continues to drop, although it continues to be the controlled substance they most often use. In 2016, 19.4 percent reported drinking alcohol in the 30 days prior to the survey, down from 21 percent in 2014.

Those western regions also had the highest rates for binge drinking, defined as drinking five or more drinks in a row at one or more times in the two weeks prior to the survey. In Four Rivers it  was 13.2 percent, in the Pennyroyal 12.4 percent.

Statewide in 2016, the rate for binge drinking was 10.4 percent, down from 12 percent in 2014. The poll found that almost 10 percent of the 10th graders in the 2016 survey had gone to school drunk or high at least one time in the year prior to the survey. 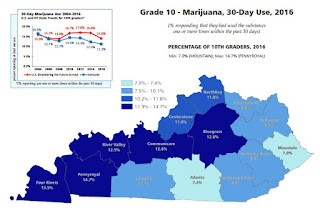 Marijuana use among Kentucky sophomores has been declining since 2010, but pot remains the most widely used illegal substance by this age group. The poll found 11.3 percent said they had used marijuana one or more times within the 30 days prior to the survey. The Pennyroyal region, at 14.7 percent, had the highest rate.

The rate of Kentucky 10th graders who abused prescription drugs (using them without a prescription) 30 days prior to the survey dropped to 2.7 percent in 2016, from 3.6 percent in 2014. The Pennyroyal region, which had the highest rate for this measure in 2016, was almost double this rate at 4.8 percent.

Overall, sophomores' use of heroin, cocaine, methamphetamines and ecstasy dropped slightly from 2014 to 2016. Fewer than 1 percent of the state's 10th graders reported using any of the drugs last year.
Posted by Melissa Patrick at 10:36 PM