Despite obstacles, more Kentuckians enrolled in Obamacare health insurance this year; many were automatically re-enrolled

Despite an open enrollment period that was half as long as last year's, 9,000 more Kentuckians signed up for federally subsidized health insurance under the Patient Protection and Affordable Care Act, commonly called Obamacare. 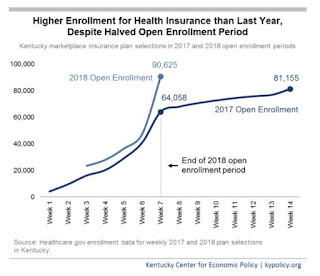 Kentucky enrollment for the 2018 open enrollment period, which ended Dec. 15, was 90,625, compared to 81,155 for 2017. That was an increase of 12 percent, the highest of any state, Dustin Pugel reports on the blog of the left-leaning Kentucky Center for Economic Policy.

Pugel, an analyst for the center, said the increase was likely due, in part, to Kentuckians being re-enrolled into either the same health plan or a similar one if they already had a plan and didn't pick a new one, compared to last year's full re-enrollment process.

"While more detailed data will become available later this year, it is very likely that auto-enrollment heavily contributed to the 43,000 signups in the final week of open enrollment, putting this year’s total above last year’s – though still below two of the three years when Kentucky used the Kynect," he wrote.

Kynect was Kentucky's state-based exchange, which lost its name in 2016 after the state moved to a hybrid exchange facilitated through healthcare.gov, the federal Obamacare website. For 2014, the first year of the exchanges, 82,792 Kentuckians signed up for health insurance through Kynect. That number increased to 109,377 for 2015 and dropped to 93,666 for 2016.

Pugel calls Kentucky's move to the federal exchange was a "setback" for enrollment because healthcare.gov doesn't allow states to extend enrollment periods, as state-based exchanges allow. He reports that nine states and Washington D.C., with their own exchanges, extended open enrollment periods.

Pugel also says more people in Kentucky and the nation would have purchased coverage through the federal exchange if it hadn't been for efforts by the Trump administration that discouraged enrollment.

They include: an open enrollment period that was cut to seven weeks from 14; a 90 percent cut in the national marketing budget; a 40 percent cut in the budget for navigators, who help people with the system; ending contracts with two outreach firms and other organizations that helped identify people who needed coverage and get them sign up; federal field staff being told to not attend outreach events; closing down the federal exchange for 12 hours every Sunday for maintenance; and the creation of 23 videos attacking the ACA.

Pugel adds that the executive order directing agencies to ease some of the insurance restrictions and the confusion caused by the numerous attempts to repeal the ACA also likely contributed to lower enrollment. In addition, he says the end of the individual mandate will likely lead to a 10 percent increase in premiums next year, "further undermining the individual insurance market."

"The robustness of the marketplace in Kentucky suggests that people continue to need and value the coverage offered through to the ACA," he concludes. "But despite this year’s success, the intentional and unintentional degradation of the individual insurance market may put an even greater damper on coverage in the future."
Posted by Melissa Patrick at 8:50 PM