The Foundation for a Healthy Kentucky says it awarded grants in 2017 totaling almost $900,000, with more than $361,000 of it on efforts to reduce tobacco use and secondhand-smoke exposure.That brought the foundation's total investments to nearly $27.4 million since it was created in 2001. 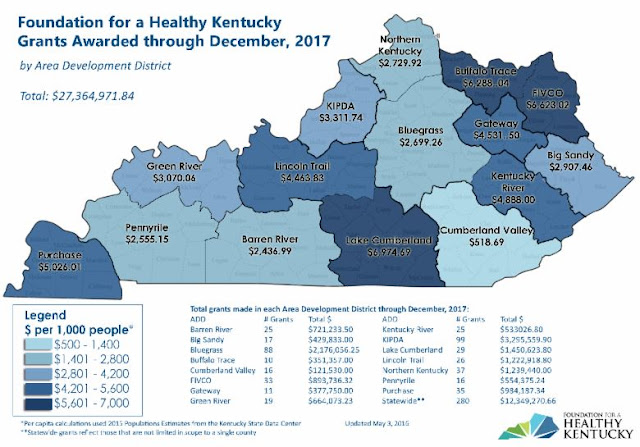 For example, the foundation gave a total of $126,400 to Kentucky Voices for Health, the Kentucky Center for Smoke-Free Policy, the Kentucky Equal Justice Center and Kentucky Youth Advocates. That was 43 percent of the $291,700 of the total grants given for health-policy advocacy.

Nearly $35,000 in foundation grants and sponsorships supported educational conferences about tobacco-related policy changes, including a proposal to increase the tax on cigarettes by $1. The rest of the foundation's tobacco-use reduction funding was dedicated to the launch of the new Coalition for a Smoke-Free Tomorrow, which the foundation staffs.

"We're climbing uphill against an industry that spends an estimated $250 million marketing its products in the commonwealth," Ben Chandler, president and CEO of the foundation, said in the news release. "Advocates can't fight dollar-for-dollar against that kind of consumer influence, so we have focused our efforts on policy changes that research shows will have the broadest impact possible. . . . Kentucky's greatest health gains are going to come at the county and statewide policy levels when elected officials enact policies that have been shown over and over to reduce tobacco use and improve health across entire population groups."

In addition to tobacco-reduction grants, the foundation gave slightly more than $323,000 to seven local health coalitions across Kentucky that are working to improve the health of school-age children in their communities.

The foundation also invested $128,000 in research in 2017, including its annual Kentucky Health Issues Poll, educational events such as its Health for a Change training webinars and workshops , the biennial Data Forum and its annual Howard L. Bost Memorial Health Policy Forum, and obtaining and reporting data valuable to understanding health policy implications.

The foundation was created in 2001 from the charitable assets of Anthem Inc., recovered in a lawsuit by Chandler when he was state attorney general after the company converted from a mutual insurance firm to a stock company. Under the settlement, the $45 million was invested and only earnings from it may be spent.
Posted by Melissa Patrick at 9:09 AM