All Kellogg's Honey Smacks cereal has been recalled, so throw it away or get a refund; CDC says, 'Do not eat this cereal' 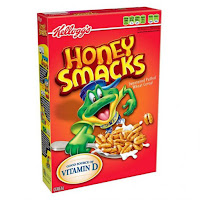 All Honey Smacks cereal has been recalled after a multi-state salmonilla outbreak has been linked to the cereal, infecting 100 people in 33 states. Two have been infected in Kentucky.

The Kellogg Co. first recalled the product mid-June, but the U.S. Food and Drug Administration says the cereal is still being offered for sale in some places.

"Retailers cannot legally offer the cereal for sale and consumers should not purchase Kellogg's Honey Smacks cereal," says the FDA.

The federal Centers For Disease Control and Prevention warns: "Do not eat Kellog's Honey Smacks cereal of any size package or with any "best if used by date." In a tweet, the CDC said, "Do not eat this cereal." 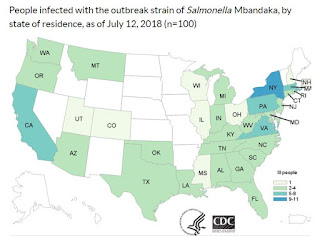 While the official recall notice is for all Honey Smacks cereal products dated between June 14, 2018 through June 14, 2019, the FDA says you need to get rid of all of it, because Honey Smacks products with earlier dates might be contaminated.

The CDC warns that even if some of the cereal has been eaten and no one got sick, you still need to throw the rest of it away or return it for a refund. And if you have stored a cereal that looks like Honey Smacks, but can't remember the brand -- throw that away too and thoroughly wash the container with warm, soapy water before using it again. Click here for Kellogg's consumer website, or call 1-800-962-1413.

Symptoms of salmonella are diarrhea, fever, and abdominal cramps, with most infections lasting four to seven days. Symptoms usually start 12 to 72 hours after being infected. Most people recover without treatment, but some must be hospitalized. Young children, the elderly and those with weakened immune systems are at most risk of a serious or fatal infection.

The CDC says salmonella is responsible for about 1.2 million illnesses, 23,000 hospitalizations and 450 deaths in the U.S. in an average year. Most of the infections come from food.

The FDA reports that 30 people have been hospitalized from the outbreak, and no deaths have been reported. The agency reports that it initiated an inspection at the third-party manufacturer that produces the cereal and that the samples taken at the site matched the outbreak strain, as had the ones taken by state officials. "As of June 12, 2018, the manufacturing facility is no longer producing product," says the FDA.

"The recall effort follows other prominent salmonella outbreaks, including one linked to pre-cut melon from a facility in Indianapolis that sickened 70 people and another connected to eggs from a single North Carolina producer where 45 people were made sick. Earlier this year, 210 people were infected by an E. coli outbreak that killed five people linked to romaine lettuce that had been grown in Arizona," Eli Rosenberg reports in The Washington Post.
Posted by Melissa Patrick at 9:48 AM