Ky. ranks next to last in exercise, which should include both aerobics and strength training; 'closest thing to a wonder drug'

Kentucky adults rank next to last for getting the recommended amount of exercise, followed only by Mississippi, according to a recently released Centers for Disease Control and Prevention study, based on CDC polling that asks people about their exercise habits and health. 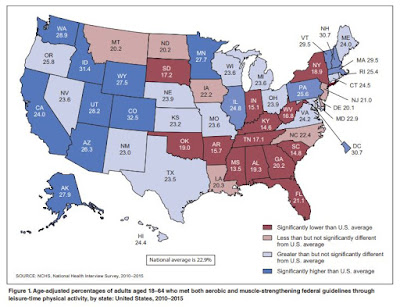 The poll found that only 14.6 percent of Kentucky adults reported getting the amount of exercise that experts say is needed, well below the national figure of 22.9 percent.

Among Kentucky men, 17.9 percent reported getting that amount of  exercise; the national figure for men is 27.2 percent.

Among Kentucky women, 11.4 percent reported getting enough exercise; nationally, 18.7 percent of women said they did.

Using data from the 2010-2015 National Health Interview Survey, the researchers looked at the percentage of adults between the ages of 18 and 64 who met the federal guidelines for both aerobic and muscle-strengthening activities during their free time. The polling did not consider any exercise done while on the job or during a commute.

Meeting the moderate exercise requirement involves about 20 minutes a day of activities like walking briskly, water aerobics, bicycling slower than 10 miles per hour, doubles tennis or general gardening. The vigorous aerobic requirement hurdle requires about 11 minutes a day of things like race-walking, jogging or running, swimming laps, singles tennis or jumping rope. And add to that two days of muscle-strengthening" exercises, like lifting weights, yoga, push-ups or sit-ups.

Exercise is known to reduce the risk of heart disease, high blood pressure, Type 2 diabetes and certain cancers -- all conditions in which Kentucky ranks in the top 10 states. It can also improve mental health, and Kentucky adults consistently report more poor mental health days than the rest of the nation: averaging 4.6 in the 30 days before they were polled, compared to 3.8 days nationally.

"Physical activity is the closest thing to a wonder drug," then-CDC director Thomas Frieden, told Kentuckians at the 2016 Shaping Our Appalachian Region Innovation Summit in Pikeville.

In general, the study found that adults residing in the Southeast were much less likely than adults in other regions to meet the activity guidelines; states in the West were consistently more likely to have a "significantly higher" rate of activity.