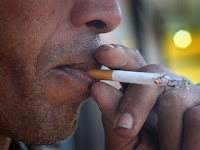 The ordinance, which would ban smoking in workplaces and public places like bars and restaurants, originally passed in December, The Kentucky Post's Chris Reed reports. But with two new members on the four-member commission, both of whom have expressed their opposition to the ban, it may be overturned.
Opponents say a ban would hurt Newport bars and restaurants, citing studies that show businesses that go smoke free experience a 20 to 30 percent loss in revenue. Supporters are still fighting to keep the ban. "We're trying extremely hard to convince the commissioners to leave the ban in place, said Jenny Beene-Skuban, volunteer for Smoke-Free Northern Kentucky. (Read more)
Posted by Tara Kaprowy at 3:06 PM