Kentucky is 'ground zero' in the war on drugs, Rogers says 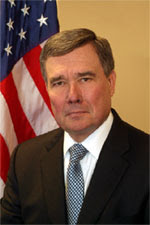 A Kentucky congressman called "ground zero" in the war against drugs Wednesday as officials gathered in London for the regional meeting of the UNITE Coalition. In attendance was director of the White House Office of National Drug Control Policy, Gil Kerlikowke, right, who has been touring the state to investigate prescription drug abuse.

U.S. Rep. Harold "Hal" Rogers, R-5th District, was the keynote speaker, The Sentinel-Echo's Nita Johnson reports. "Our back yards have been become battlegrounds," Rogers said. "Just last week, five pharmacies in the area were robbed. Our overdose rate is twice as high as the rest of the country."

Rogers, left, repeated expressed his dismay over Florida Gov. Rick Scott's proposal to cancel his state's prescription-drug monitoring program, which has yet to really start. The lack of a monitoring system allows drug dealers to "doctor shop," obtaining prescriptions for drugs they sell in Kentucky. "There are drive-through pain clinics in Florida and 98 percent of the top 100 pain killers is oxycodone," Rogers said. "Last year, Florida alone issued 19 million units of oxycodone. This is an urgent crisis for the people I represent."
Rogers credited UNITE coalitions for fighting against the problem. "Adversity is being harnessed into hope," he said. "UNITE is reshaping future generations."
At a roundtable discussion before the gathering, Kerlikowske spoke of his goals. "I'm here to listen," he said. "The drug problem really impacts so much of our country ... It cuts across all of the social lines, all of the racial lines." (Read more)
Posted by Tara Kaprowy at 10:45 AM