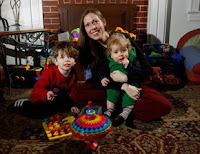 "It's not easy being a working mom when you are trying to breast-feed," said mother Lauren Goodpaster, right (H-L photo by Mark Cornelison). "Just having the support, having people say that's a great thing you are doing, that was kind of a boost to keep me going on days when it is such a pain."

The rules, which took effect when the Patient Protection and Affordable Care Act was signed March 23, 2010, require employers to provide reasonable break time and a private, non-bathroom place for nursing mothers to express breast milk during the work day. For more information about the regulations, click here. The U.S. Department of Labor has not yet released specific accommodation requirements or penalties if companies don't comply.
As of now, accommodations can be anything from providing a clean room with a locked door to allowing a fast food worker time to pump breast milk while in her car, Meehan reports.
Studies show breast-fed children are sick less often than those given formula, resulting in mothers missing less work time to care for their kids. In Kentucky, just 59 percent of new mothers breast-feed, compared to 75 percent nationwide. (Read more)
Posted by Tara Kaprowy at 3:11 PM